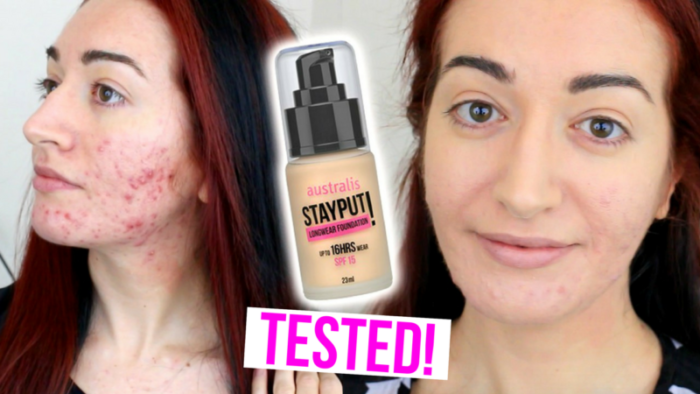 Another day, another foundation review! And spoiler alert: it’s another one you’ll probably want to rush out and buy. The Australis STAYPUT! Longwear foundation is pretty bloody awesome in a lot of ways, but as always, there’s a few cons too. But look, more about that later, let’s get stuck into the good stuff! I purchased this product not knowing anything much about it. Really, the claim of “up to 16 hours wear” was all I needed to hear to snap this up. Looking at it later, I was a bit worried it wouldn’t do what I needed it to. It says it has a luminous finish, which made me think there was no way this was going to make my oily face look good. I’ve already got enough of that ‘luminous finish’ going on! But, reading more about it, it’s designed more to even out the skin tone and brighten the complexion. I don’t think it brightens anything, but it does a great job at evening out tone. And it did an excellent job at keeping all my oil at bay for an extended period of time. The website does say it gives a matte finish, but this isn’t mentioned on the packaging.

The comment about the acne is a worry for me. I want to continue testing, and see if I am blessed with more spots. If so, I will amend this review and let you know.

Apart from that, this is yet another winner in my books. It’s one of the closest matches I’ve found so far to the Estee Lauder Double Wear, my HG. But it’s half the price! Actually, even less. More like a third.

I think that if you’ve seen this in Priceline and you’ve been wondering if it will suit your very oily skin type, then I can say without a doubt it will. You’ll get loads of wear out of it, and feel comfortable all day. I vote you give it a crack!