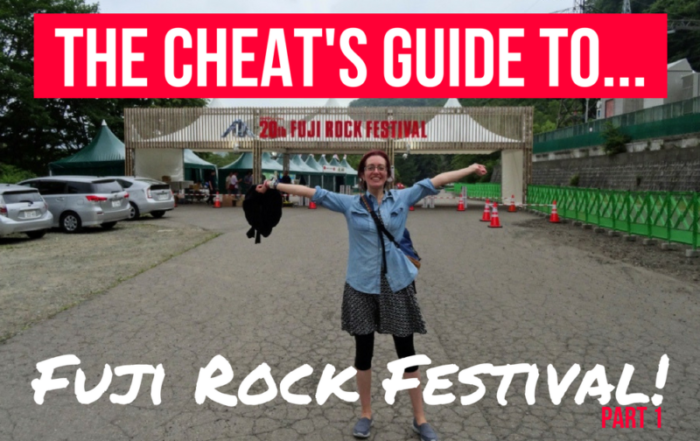 This post will only be interesting to about 0.01% of you. So, soz to anyone who isn’t keen on festivals (or camping!) But I am EXCITED! In less than a month, I’ll be back in Japan, rocking out at the Fuji Rock Festival. Now, I’m not going to pretend that I know all there is to know about this festival, but this will be my third year at the show, and I reckon I’ve got a few bits of ‘inside info’ that can help anyone attending.

This is Part 1 of 2 about Fuji Rock. Next week, I’ll let you know all about how to be a festival camping pro!

Fuji Rock is an incredible annual festival that has now surpassed 20 years of operation (woo hoo!) It is Japan’s premier international festival, blasting tunes across three massive days in July, at Naeba Ski Resort, Yuzawa-Cho, Niigata. Attendees can rock out for the full three days, or single days if preferred. Many people choose to camp at the festival, but that’s really only an option! There’s lots of accommodation dotted around, but they do fill quickly, so be quick to book well in advance. In addition, I’ve heard there’s a lottery system in place for surrounding accommodation – but I don’t know the details for that. If you’re an international attendee, I personally wouldn’t bother with it so much, unless I had serious money to burn. The festival isn’t cheap, but the festival camping is – only ¥3,000 (approx. $30). I’ll leave more info about departing the festival for my next post, because if you’re camping, then I’ve got some good tips and tricks for you! But I will say that if you’re leaving on Monday morning, make it early. Get up when the sun gets up, pack up your camp, and get thee to the shuttle ASAP. You plus thousands will be exhausted, smelly and ready to go home, so the sooner you can get moving along, the better you’ll feel. Once it hits 9am, the sun will be blazing – try and beat it.

I look forward to seeing you back here next week for part 2! If you’ve got any Fuji Rock tips to share, leave ’em below.